It Takes One Rotten Apple To Ruin Your Day


I lived in my neighborhood for 25 years. I was one of the pioneers. We bought our house before it was built. My son was 3, my daughter 6. Neighbors came and went, and we stayed. During all these years, not once did we have an altercation with any neighbor. Not once, except for today.

The county that I live in allows me to have 4 dogs. No questions asked. Also, as I am a bona fide rescuer, I can have unlimited short-term fosters. I have had 11 dogs in my house. I have about half of an acre of fenced-in yard. So, there’s plenty of room for them to roam.

When my mother-in-law moved in with us, we made a commitment not to keep any more fosters. My mother-in-law was a handicapped person, afflicted with advance stage of rheumatoid arthritis. It was not fair to her. At that time, we had five of our own dogs. Four were living in my house and the fifth would come and go, as she belonged to my daughter and my son-in-law.

My next-door neighbor bought her house at about the time we ceased to foster. She knew that we had 5 dogs and was fine with it. Her husband worked for a veterinarian and they told me that they were thinking of fostering themselves. During this period, I would dogsit my friend’s dogs. But they would stay 1 to 2 weeks and then go home.

Anyway, to make a long story short, Ethan parked his car in my neighborhood and went away to his honeymoon. He left on July 6 and will be back July 22.

I was livid. Why didn’t she come and knock on my door and ask me nicely why the car was parked there? First of all, part of that area is really my territory and, besides, it is a public street. We don’t have marked parking spots.

I knocked on her door, and asked her nicely why she didn’t come and talk to me personally. She started yelling at me that the car was parked in front of her house for far too long and she was sick of it. I told her that he was on his honeymoon. (I still thought that we could be civil.) She continued to yell at me and told me to move that car. She didn’t want to look at it anymore. Now, I lost it somewhat. I yelled back and told her that it was a public street. “That’s right,” she yelled back. But your son is rude, move the car. You have more land than I do, have him park it in front of your house.”

First of all, other neighbors park in front of my house. More often than not, there is no room. That was why Ethan parked in that area. I told her that. But she wanted to hear none of them. She kept screaming that I am rude, that she is sick of my dogs, and that I have far too many. I interjected that I really have two dogs, ass my other dogs died in 2005 and 2007. We never got more. (We are downsizing ourselves.) She kept yelling that I have far too many and that she would call the county on me. I told her to go ahead, as I am allowed to have four dogs and I have two and a visiting dog. (I didn’t tell her the good news that I am a bona fide rescuer. That really would have set her off.)

Anyway, she continued yelling that she was sick and tired of seeing the FedEx and UPS truck come to my house on a daily basis, that my dogs have been annoying her for the past 8 years, that she never said anything to me, but she had it, and that she was tired of my children coming to visit me and parking in front of her house. She also told me that she was sick and tired of not being able to get to her mail box. Now there’s a huge space between her mailbox and Ethan’s car, so I got vicious and told her, “Oh, you are not THAT big.”

Her boyfriend came out and told me to go home. He was a menacing-looking black man. But he didn’t scare me. He thought that he did. I looked him and told them that they were the rudest people I’ve met and thanked them for creating this havoc. No one had any neighborly problems before, but thanks to them, we now have trash living in our neighborhood.

Ps.: Part of the area that my son parked the car is my land.

The Pictures Tell the Story

My house and my minvan is in my driveway. 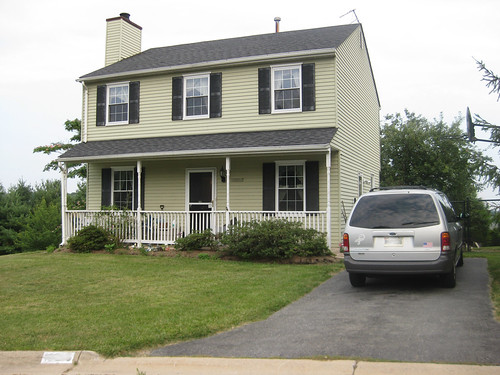 The distance I have between his car and my mailbox 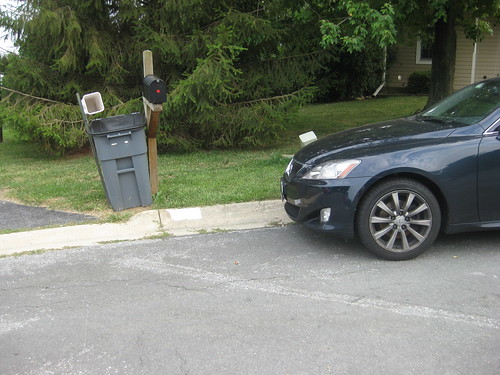 The distance of her mailbox and my son's car. 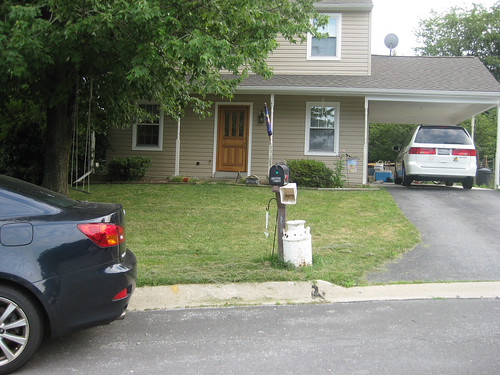 No car can park between my Jetta and my driveway because there is not enough room. 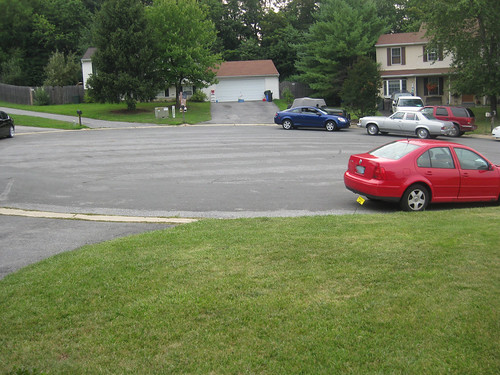 My land goes all the way down to the tan car, but there is no way my son could've parked his car anywhere. 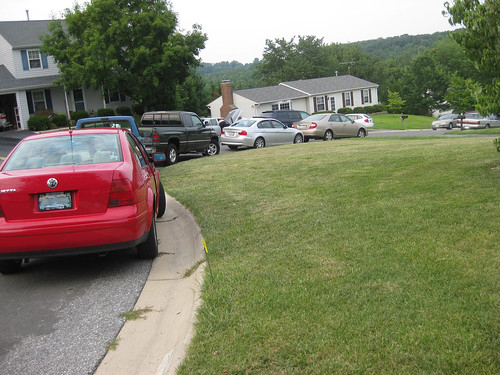 So to make my day, this was in my mailbox today:

Handle  every stressful situation like a dog.
If  you can't eat it or play with it,
Then  pee on it  and walk away.